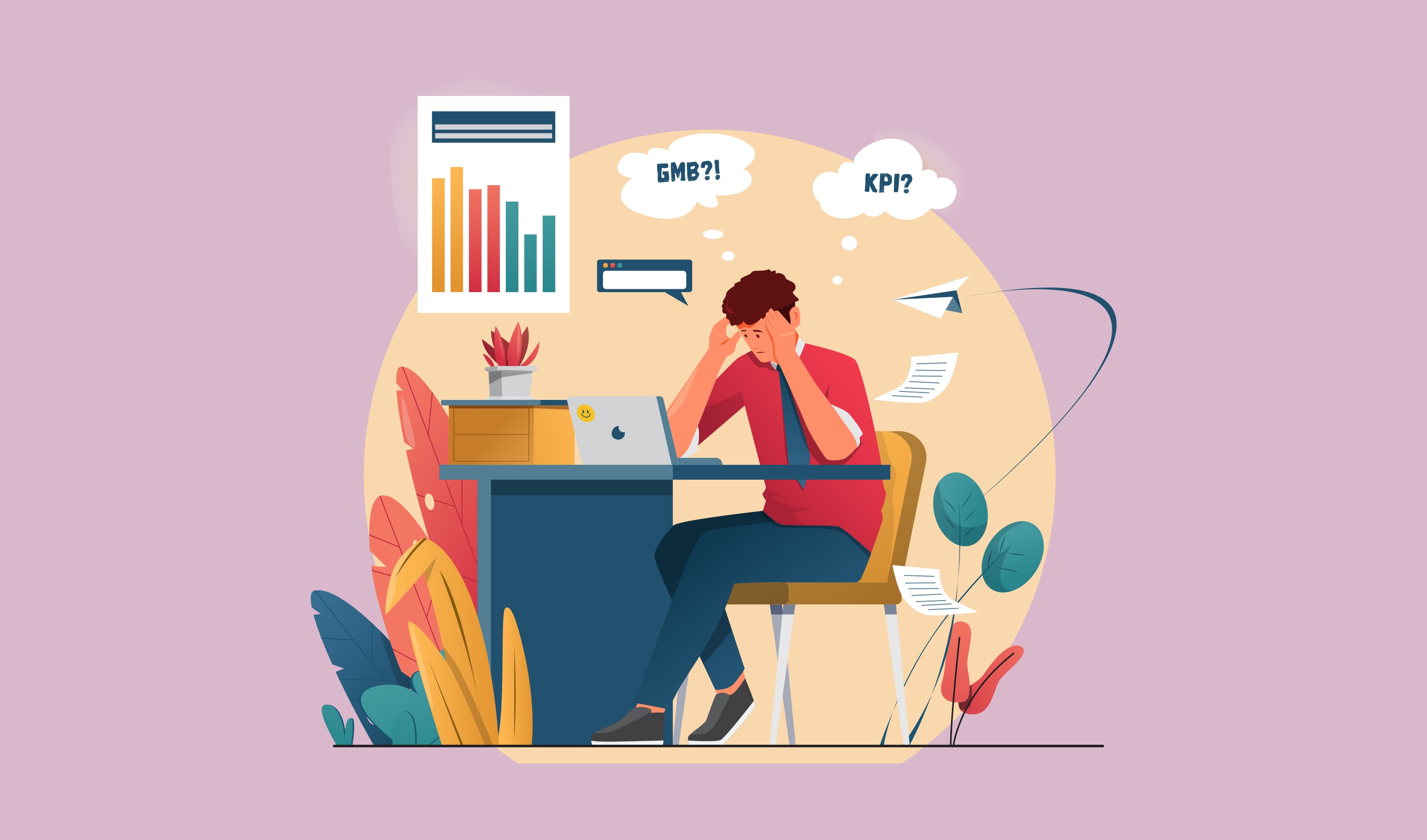 If you’ve ever been utterly confused by marketing jargon, you’re not alone.

Our industry loves its esoteric language and acronyms (iykyk) but, the truth is, it’s not rocket science. In fact, you’ll probably recognize a lot of these concepts even if you don’t know the lingo.

We’re here to help you navigate the menagerie of alphabet soup, so keep reading to learn a few things and be able to conveniently convey concepts (say that five times fast).

Fold is a term borrowed from newspaper design, where it quite literally refers to the fold in a physical paper (that thing that comes from trees, for our younger readers). When we’re talking about something digital, like a website, we use scroll and fold interchangeably. So words and images either fall above or below that scroll/fold. And to see something below the scroll/fold, yep, you guessed it, the user has to scroll down.

That’s a lot of R’s and a whole lot of confusion. Even within the industry there’s some debate about how to define these terms, but we’ll keep things simple. They all describe some level of digital influence on our physical world (if we are in a physical world, that is ?):

The easiest way to think about these terms and how they relate to one another may be with an immersive computing spectrum. The first graphic in this post is also helpful.

A combination of the words “automatically” and “magically,” this fun word refers to any technical function that’s hidden from the user and which appears to be done by magic. Call it ingenious or inexplicable, it just works—and it makes us feel pretty cool (pay no attention to that man behind the curtain!). Check out this song-nominating tool we built, integrated with Facebook and Spotify APIs.

The excess space, generally ⅛ inch, that’s taken up by a graphic. It’s used by designers to ensure an entire graphic makes it onto the page (you’ve probably subconsciously known about bleed since elementary school, when you had to color shapes and cut them out with scissors).

Let’s start with the pronunciation (which a lot of people happen to get wrong). It sounds like “cash,” as in money, not “cash-ay.” Okay, now that we’ve got that out of the way, let’s talk about the meaning. Cache refers to files that are saved by a web browser in order to be loaded more quickly in the future. Those files are said to be cached. It’s sort of like how when you order a pizza, the restaurant has all the ingredients ready to go and they don’t need to run to the hog farm to get pepperoni (sorry if you’re hungry now). Caching helps reduce latency and overall traffic on a network.

Stands for Cyan, Magenta, Yellow, and Key. It refers to the four inks printed together to create full color images. The fourth part of the acronym, Key, comes from an old printing term but simply means black.

Refers to the shifting of margins in a printed booklet. This happens during the finishing process and the extent depends on the number of pages and their thickness.

Call To Action. Prompts an immediate response from a user and often includes a clickable button, either directing the user to view more content or sending them to a landing page. A CTA could be “Call Now!” or “Learn More.” It’s usually not “Go Away.” You may be wondering… what’s our CTA with this blog post? Nothing! We’re just happy for you to be learning all about the world of digital marketing (okay, okay, maybe some small part of us would be happy if you clicked here to learn a bit about Makeway).

Domain Name System. The thing that converts domain names into IP addresses. It’s sort of like the contacts you have in your phone. Because who actually knows their friend’s phone numbers anymore? Without DNS, we’d all be typing in long strings of numbers instead of the names of our favorite websites. You may hear a variety of phrases used to explain the acronym DNS, including Domain Name System, Domain Name Service, and Domain Name Server.

End of Day/End of Week. As in, I’ll have this project over to you by EOD or EOW.  In the marketing world, it’s a slightly more acceptable instant-messaging or email term than WTF (and at this point we all know WFH, right?).

For Placement Only. Used in graphic design and printing to denote something as a placeholder. It’s often a low-resolution image indicating where a high-resolution image will be placed. This cute puppy is not FPO (we just want to give you a reward for reading this far).

A service provided by Google that allows you to control the information in your Knowledge Panel (that box to the right of your screen when you Google something). With a free business profile you can connect with customers across Google Search and Maps. It’s all the more important during the Covid-19 pandemic when physical interactions are limited.

A principle in web design that refers to making websites accessible to all browsers. When an outdated browser encounters something it can’t display, graceful degradation is used to ignore certain attributes while allowing the rest to function normally. This ensures the website can provide the basic functions and formatting. Think of it like the upgrade process with our smartphones. Some people get a new iPhone every year, but Apple and app developers need to make sure they’re still accommodating users of phones that are 1, 2 or 7 years old (okay, maybe not 7—they’ll kindly ask those people to join us in the 21st century—but you get the point).

Used by designers to describe the spacing between individual letters or characters. It’s fairly subjective, but good kerning helps make readable text that’s aesthetically pleasing. One of the most recognizable examples of clever kerning is the FedEx logo, which incorporates an arrow into the spacing.

Key Performance Indicators. It’s used in a variety of roles and industries to measure progress toward an objective, but it’s especially prevalent in marketing jargon.

Placeholder text that’s meant to look natural so as not to distract from design layouts. It usually begins with “Lorem ipsum dolor…” (and we’re not gonna lie, it makes us feel pretty fancy).

Using both digital and traditional channels to create a unified experience with seamless messaging for customers. As you might imagine, omnichannel is becoming all the more important as Covid-19 shakes up the sales funnel.

A system used to describe colors with numerical identifiers. The Pantone system supports communication from a designer all the way to the customer. Fun fact: Pantone is an actual company that developed the proprietary system.

A collection of HTML tags (or code) that are used to mark up web pages to help Google and other search engines understand the contents of the website. Without schema, you’re just hoping search engines pick up the right keywords.

A type of font, like Times Roman, that has small protrusions at the ends of some letters. Fonts without them are called sans serif. Notice the difference in the examples below? 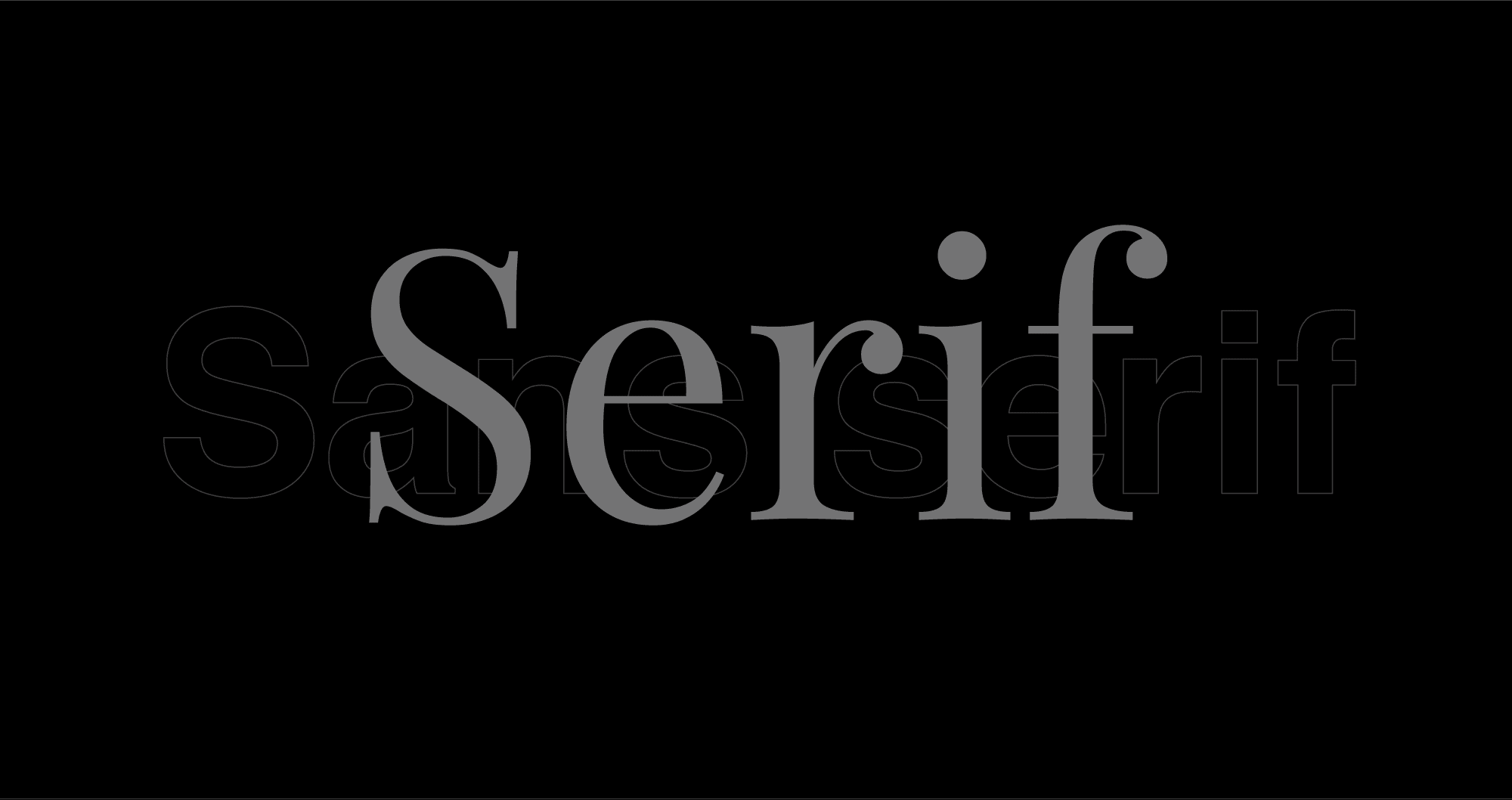 Work in Progress. The term is used commonly as marketing jargon, especially in the context of progressing toward a “sprint goal” in a Scrum-organized project (it’s pretty much the same as when you say your ambitions of becoming a better chef or finally cleaning out the closet are “works in progress”).

Refers to the height of a lowercase “x” and helps to describe the proportions of a typeface. It’s different from the point-based font size you select in your word processor because that’s a measure of the full height and not the lowercase.

Well, there you have it.

Hopefully this has been helpful in understanding marketing jargon and expanding your ability to communicate with developers and designers.

Makeway is an award-winning digital-first agency with a decade worth of design, development, and problem-solving experience. This is our passion, so don’t hesitate to drop us a line. And click here to see some of the work we’ve done for satisfied clients like Nationwide, Nalgene, and Pro-Tech Manufacturing. 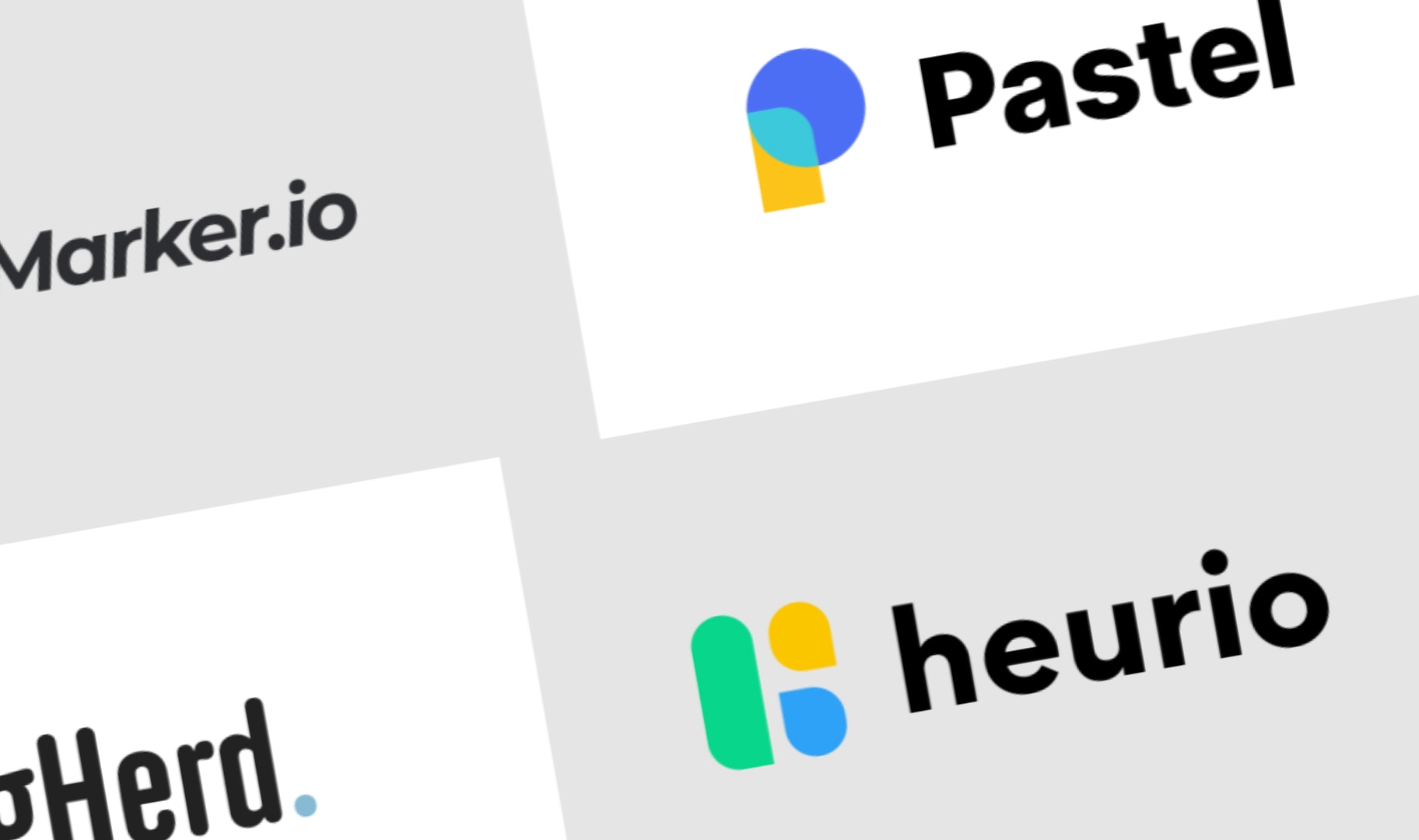 Streamline communication with these feedback tools 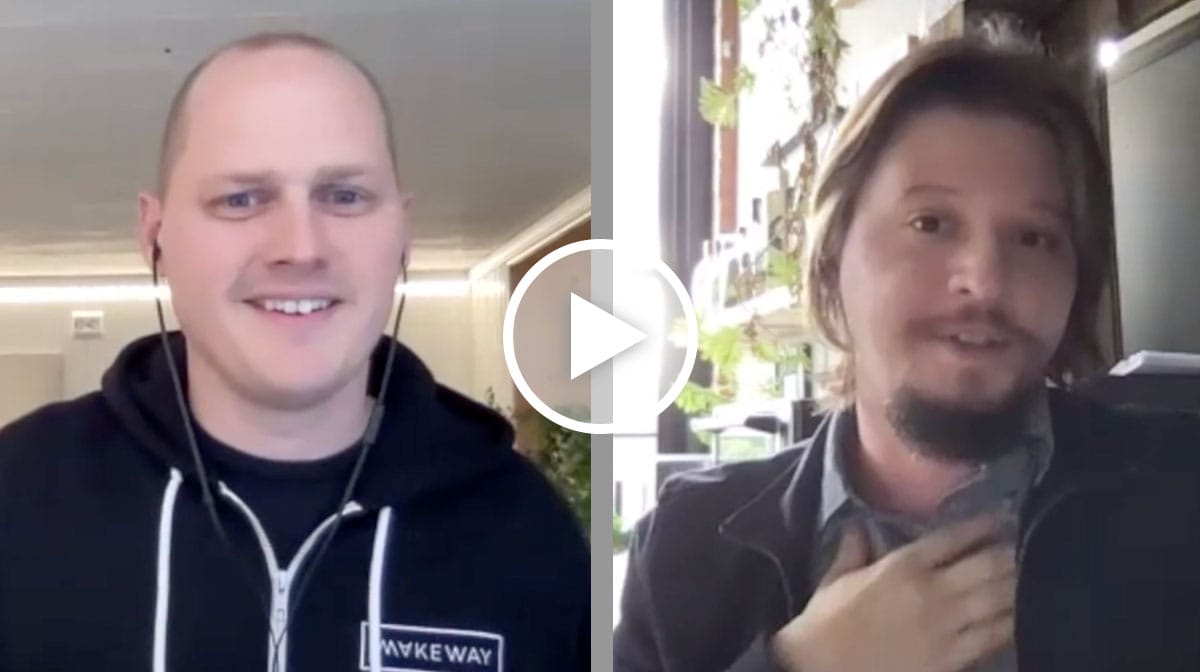 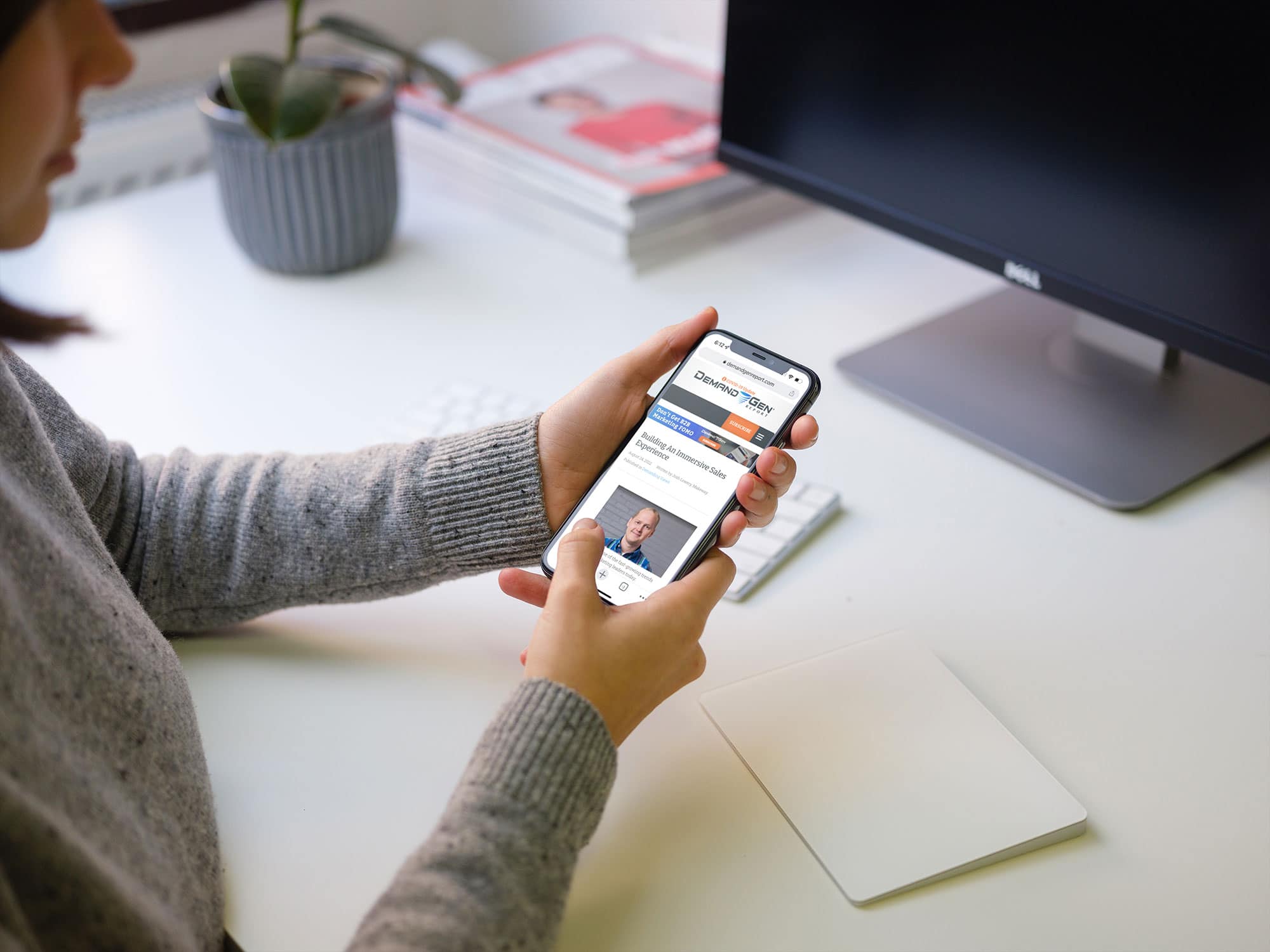